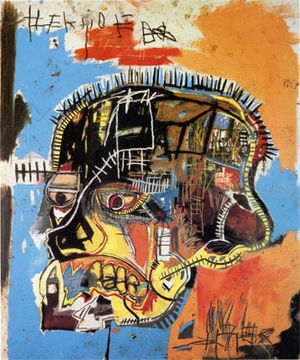 UPDATE 4/14: The gallery had a video of the exhibit posted, if you missed it.

A few weeks ago I didn’t even know who Jean Michel Basquiat was and I wonder all the reasons why. If it were not for my friend/artist Ferlaisa I may never have known. His paintings over a thousand of them are coveted in the higher echelons of collectors, but the average person doesn’t even know his name… Jean Michel who? Is he French, is he Haitian? But, his paintings fetch between 1 to 16.3 million at auctions.

Born to Haitian and Puerto Rican parents, his father an accountant and his mother an educator, Basquiat was never formally trained. He drew on blank pieces of paper from his father’s office and in his later years a graffiti artist in SoHo. Not the SoHo you know now, but the preeminent cousin of the lower easy side back then. He wrote graffiti poetry, often signing SAMO at the end. His poetry was eventually noticed by the local art crowd leading to a discussion about this collection of street art. Jean Michel Basquiat showed up that day and announced that he was SAMO. Everyone began asking him questions about what he had written, why and the meaning of SAMO. Expecting some deep, prophetic meaning Basquiat simply proclaimed that it meant ‘same ol’ shit’. Later he would be sponsored by a prominent Chelsea art gallery, his first show would sell out in a matter of minutes. And overnight, his paintings began to sell for between $30,000 to $50,000.

His style is categorized as Neo-expressionist and Primitivist. Even though I tend to disagree with the root of that latter word of primitive. I don’t hear Picasso being categorized as being primitive. It echoes of condescension. Makes me think of African art, even in museums it’s called tribal art, but Egyptian art is considered ancient. Last time I checked Egypt was still in Africa. Yet, it has been canonized as European. Maybe, this is why more people don’t know his name and are not aware of his contribution to art; myself included.

Basquiat would overdose from drugs at the age of 27. He would travel to California and Europe before that, become a bit paranoid due to his sudden success and cultivate a lasting relationship with Andy Warhol.

The Gagosian Gallery was displaying a collection of privately owned Basquiat paintings from February 7th until April 6th. My friend Ferlaisa tells me that it is very rare that a collection of this magnitude is seen in public and after she told me a bit of the back story that I just told you all about — I had to see his work for myself. So, Friday I left work 15 minutes early and rushed to Manhattan, I would only make it 10 minutes before closing and according to my friend I only really got to see 3 paintings in detail. I was determined to go back the following day, April 6th; the last day of the showing. I got there around 5pm, thinking it would give me plenty of time to see the exhibit but I was not ready for the line that stretched pretty much the entire block to get in. I guess more people know about Basquiat that I thought. Luckily, it was a fast moving line and by 5:30pm I was inside. OKAY! 30mins, take it all in.

First off, Basquiat’s paintings are not small, some spanning 10-15ft of wall. They are colorful, provocative, political and masterfully composed. Many of his pieces contain repeating words and images. Smaller images in one would eventually become fully realized pieces of their own; like Joe the black waiter. Often words are scratched out because as my friend tells me, he thought it would make the viewer pay closer attention. Worked for me.

Later in his life, his pieces would take on a simplicity that I personally found very appealing. And were some of my favorite pieces, like ‘Riding with Death’.

(c) This artwork may be protected by copyright. It is posted on the site in accordance with fair use principles.

Unfortunately, the gallery would not allow any photography, but this little guy managed to find his own way around taking a piece of Basquiat home with him.

I, on the other hand could only manage this;

PS: The met today received a donated art collection valued at 1 billion dollars, containing important works of art from the Cubism period. They are also in talks to buy the Whitney building, which would make them a contender for the worlds greatest collection of modern art. The Whitney acquisition is slated for September 2015. As my friend Ferlaisa said, “watch out MoMa”. The works should be on display by next year.

One thought on “Jean Michel Basquiat – a 20th Century Picasso”