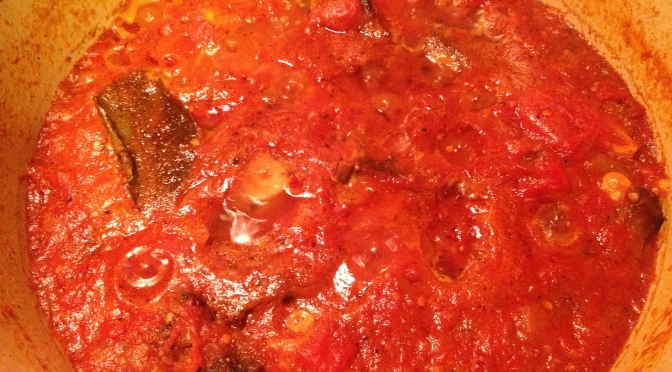 One of my favorite things to do this summer was stopping by the garden, pick some fresh veggies to incorporate into a meal that same day. This year I mainly had tomatoes, peppers, basil, beans and cantaloupe. However, my mom grew cucumbers, hot peppers, zucchini and squash in her backyard and I was able to incorporate those into some dishes as well.

Some simple things to make would be a tomato and cucumber salad. I would add halved cherry tomatoes, diced cucumbers, basil, in a bowl with some extra-virgin olive oil, balsamic vinegar, salt and pepper to taste. I would eat this with fish or a piece of sautéed chicken to have a healthy and refreshing summer lunch. Another favorite of mine would be to make a cooked version of a dish popular in my country called tomato choka. It is an dish with Indian origins and can best be described as a fresh tomato salsa but with more aromatic spices and the process of adding burnt garlic oil. We call this process a “cuun-kay”, forgive the spelling, it’s one of those ethnic words you grew up with but never had any formal reason to spell it. At best it is a technique of almost burning whole cloves of garlic in oil with cumin, maybe some chilis and adding this flavored oil to anything from dhal or in my case fresh tomatoes. Normally, we would add it quickly in order to preserve the fresh taste of the tomatoes. However, I like it a bit cooked down to the point where it starts to resemble a homemade ketchup. Come to think about it, this became my summer ketchup – I put it on everything. I would eat this with eggs and toast, or simply with a hotdog.

One Sunday morning I got up inspired to make a great brunch dish. I had some sweet peppers from the garden, some left-over homemade tomato choka, potatoes, eggs and fresh baby mozzarella balls I had marinating in olive oil, garlic and basil. I quickly diced up the peppers and potatoes. Then boiled some salted water to blanch the potatoes to give a head start on the cooking process. I then made some quick home fries. I plated a layer of home fries, a couple of marinated mozzarella balls, some tomato choka and a fried egg on top. I like it so much that the following weekend I made it again, but this time I had some fingerlin potatoes and no more choka. So, I improvised, added bacon, but the results were still delicious.

Lastly, as summer began drawing to a close I had an abundance of tomatoes and didn’t want them to go to waste. So, I decided to make and bottle my own homemade tomato sauce or gravy as the Italians might say. I elicited the help of my two nieces, it helped focus their unending supply of energy into a single task, rather than making mischief while uncle Marcus is in the kitchen cooking. They love helping in the kitchen. I took all of my tomatoes and with a paring knife made small cross marks at the base of the tomato. Then blanched the scored tomatoes in hot water for a minute or two. Pulled them out and place in an ice bath immediately to stop the cooking process. I got my nieces a chair and set them by the sink to begin peeling. I showed them where I made the cross marks with my knife and how to peel the skin off easily. It only took me showing a 2 and 4 year old once and they were off and running. In the meantime, I placed a large dutch oven on the stove to heat up with some olive oil. I then browned off about 2lbs of beef short ribs (optional), removed, then added my aromatics (onion, shallots and garlic) making sure to scrap up the grown caramelized bits on the bottom. Once they had all sweated and softened nicely, back in went the beef short ribs, some white wine, a bay leaf or two and a piece of parmesan reggiano rind to build that base depth of flavor. Then drop in the tomatoes (I don’t mind the seeds, but feel free to take them out). I added some basil and some more fresh ones closer to the end of cooking. Let cool, bottle and enjoy into the winter.

Kids in the kitchen. 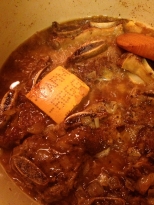 Days later, I bought some gnocchi and made a quick meal. Simple. Just boil the gnocchi until they float, no longer. Heated a sauté pan with olive oil, adding some fresh zucchini, I added some of the sliced beef ribs I reserved from a few nights ago with some of the tomato sauce as well. Toss in the gnocchi as soon as they are done, I transfer straight from the pot with a little of the water used for boiling. That water has some starch that will help the sauce stick to the pasta. Shave some fresh parmesan on-top and eat!